For the final concert in our inaugural ‘Tune In’ series, we’re delighted to present not just two of our favourite pieces of chamber music, but arguably two of the finest pieces of chamber music ever written. Written at opposite ends of the 19thcentury, these two works by Tchaikovsky and Mendelssohn share an unbridled energy and excitement.

The music career of Pyotr Ilyich Tchaikovsky was a highly unusual one. Born in 1840 into a family with a long history of military service, he was primarily raised to prepare for a career as a civil servant. At this time in Russia, the only career paths for musicians that didn’t come from the affluent aristocracy were either as a teacher or an instrumentalist in one of the Imperial theatres, neither of which were viewed particularly highly, and in fact may have even been considered a similar social standing to common peasants. However, Tchaikovsky was clearly extremely bright, becoming fluent in French and German by the age of six, and becoming as adept at reading sheet music as his teacher by the age of just eight. However, although Tchaikovsky continued having music lessons with different teachers until his late teens, none of them ever thought that he had any chance of becoming a first-rate musician, let alone a composer. However, shortly after starting out as a junior assistant in the Ministry of Justice in 1859, the Russian Musical Society was founded, and Tchaikovsky in his spare time took theory lessons which became the precursor to the founding of the St Petersburg Conservatoire in 1862, which Tchaikovsky enrolled at as a member of its premiere class. Here, he acquired the tools to become a professional composer, most importantly acquiring traditional European principals and musical forms that he was able to assimilate into his own Russian upbringing.

Over the next twenty-or-so years, and especially in the 1880s, Tchaikovsky would steadily gain a positive reputation as a composer. In particular, his Symphony No. 5 in E minor would prove to be incredibly popular and Tchaikovsky himself would tour it around Russia and Europe. The surge in popularity during the 1880s resulted in him being accepted as an honorary member to the St. Petersburg Chamber Music Society in 1886; as a thank you to the then Chairman, Eugen Albrecht, Tchaikovsky promised that he would write the Society a piece of chamber music. However, it took him over a year to decide on the exact instrumentation he wanted, and then a number of further years to even complete the work. Happily, however, whilst working in Florence in 1890 on his new opera, The Queen of Spades, Tchaikovsky sketched down a melody that would he eventually morph into the gentle slow movement after leaving the city behind. It is this theme from which the entire piece gets its name, which is actually, in essence, a bit of a misnomer. Besides the slow movement, very little of the work evokes feelings of Italy! After he returned later to Russia later that year, he continued working on the string sextet that he had devised, but found it, in his own words, ‘frightfully difficult’ to blend all six independent voices together. After a further two years of revisions and re-writes, the work finally received its premiere in 1892.

It is clear that the large orchestral works that Tchaikovsky wrote at the same time as Souvenir de Florence had a profound impact on the composition. The textures he creates with only six instruments are incredibly dense, and this makes every single part remarkably difficult to play! The passionate, ferocious opening movement gives way to the more gently melodic slow movement. However, the latter two movements, especially the high-spirited finale complete with a fiendish fugue at its centre, show the influence of Slavic traditional music, rather than any Italian influence suggested by the work’s title.

Of all the famous child musical prodigies that the late 18th and early 19th centuries gave us, Felix Mendelssohn is arguably the most extraordinary. Unlike Tchaikovsky, Mendelssohn was born into a highly intellectual (his grandfather was the pre-eminent Jewish philosopher of the Enlightenment) and very affluent household (both his parents’ families were bankers). Moreover, as soon as his parents discovered that both Felix and his sister Fanny were precociously talented musically, they gave their children every encouragement to hone and develop their skills. Mendelssohn began taking piano lessons from renowned piano teacher Marie Bigot in Paris at the age of seven, and then subsequently began studying composition with Carl Friedrich Zelter in Berlin from the age of nine. Zelter was an admirer of the works of J.S. Bach, and this would prove invaluable to Mendelssohn’s compositional style; his skill in counterpoint, as well as his fugues and chorales, show a deep admiration for Bach’s writing. Indeed, Mendelssohn’s admiration for Bach would come to a head in 1829 when he arranged and conducted a performance of Bach’s St Matthew Passion, a masterpiece that had not been performed since Bach’s own lifetime, and it is widely accepted that it was this performance that was the central event in the revival of Bach’s music in Germany and, eventually, throughout Europe.

Mendelssohn’s composition studies were clearly very successful, as the precocious child started composing almost instantly! His early works were also not performed publicly, but his parents hosted social gatherings at the family home in Berlin for the wealthy aristocracy and intellectual elite of the day, and it was here that many of his early works did get played, with Mendelssohn himself often playing one of the parts. By the age of fourteen, he had written his 12 String Symphonies, and although they remained unpublished until long after his death, they display a truly extraordinary talent at work. The other major impact of having Zelter as a teacher was that Mendelssohn would meet another of his students, Eduard Rietz, seven years Mendelssohn’s senior, and a similarly gifted young musician and violinist. The two became very close friends, and Mendelssohn would start taking violin lessons from him alongside his composition classes. Mendelssohn dedicated his early Violin Concerto in D minor (not to be confused with the later, and much more famous Violin Concerto in E major) to Rietz, and would subsequently write another piece for Rietz’s birthday in 1825, that being the Octet in Eflat major. It is highly likely that the work would have received its first performance in his family’s home with Rietz playing the principal violin part, and Mendelssohn playing either one of the subordinate violin or viola parts.

It can never be overstated just how astonishing it is that a person at the age of just sixteen could have written a work this special. Although he would later revise the work a few years later, the vast majority of the original material was kept exactly the same. It is a work that blends vibrant, youthful energy with a remarkably mature compositional style, intimate understanding of each instrument’s capabilities and daring invention. Perhaps most notable about this particular piece is that Mendelssohn composed it with an orchestral sound world in mind, despite only writing for eight string instruments. He specifically instructs the players that “this Octet must be played by all the instruments in a symphonic orchestral style. [Dynamics] must be strictly observed and more strongly emphasized than is usual in pieces of this genre.” Indeed, it is the thrill of this ingenious interplay between all the instruments that gives this work its unbridled joy, and makes the work a fitting choice with which to close our first ever online streaming series. 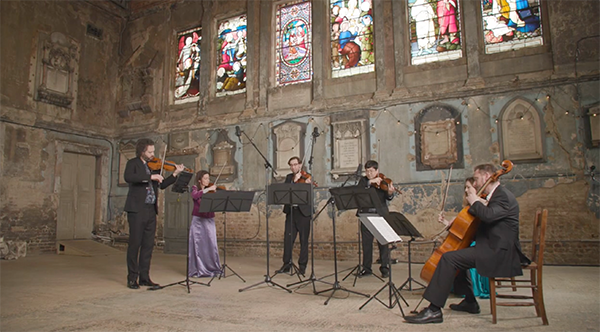 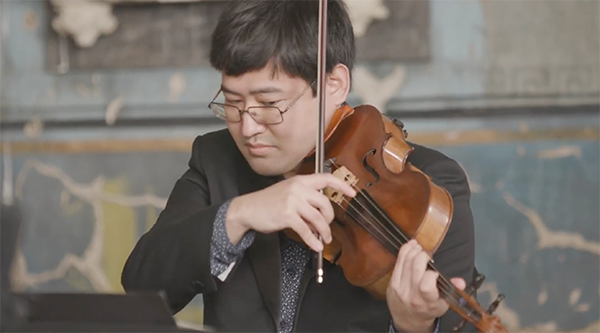 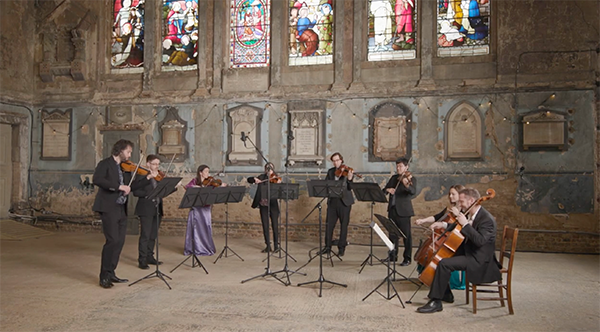 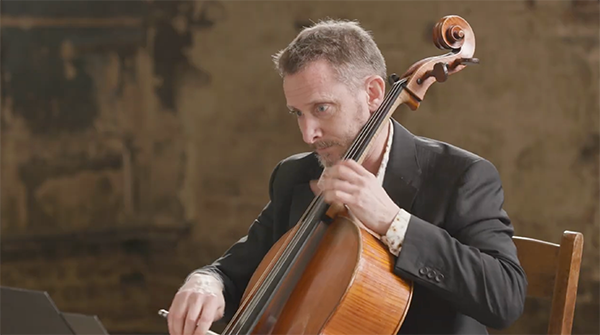