To begin the second half of our new ‘Tune In’ series, we make a return to the Baroque era we visited in our celebration of the Brandenburg Concertos, this time celebrating the work of Bach’s contemporaries, with works by Vivaldi, Handel, Rameau and Gabrielli. We’re delighted to feature four of our principal players: violinists Jonathan Stone and Henry Chandler, cellist Chris Grist and harpsichordist David Gordon.

Georg Frideric Handel is most well known today as the composer of large-scale choral works, such as The Messiah or the iconic coronation anthem, Zadok The Priest. However, as with his contemporaries, he was equally adept at writing music for smaller forces. His Trio Sonatas, written at around the same time as some of his most famous operas in the 1710s and -20s, are full of character and charm, and his example in G minor is no exception.

It is no overstatement to say that whichever genre Johann Sebastian Bach turned his mind to, he mastered, and the sonata genre is no exception. Bach composed most of his chamber music for solo violin, most notably the famous set of three sonatas and partitas for unaccompanied violin (BWV 1001-6) and the six sonatas for violin and continuo (BWV 1014-19), all of which he completed whilst he was being employed as the Kappelmeister at the court of Anhalt-Köthen, north of Leipzig. Bach’s most important contribution to the style was writing the accompanying keyboard part out in full, rather than simply indicating a sequence of chord symbols and how long each chord was supposed to be played for, and leaving it up to the player to flesh the part out themselves.

The accompanied sonata genre was pioneered in the late 17th century by Italian composers such as Arcangelo Corelli, and the genre was generally divided into two styles: the sonata da chiesa (“church sonata”, which usually carried a very serious expression) and the sonata da camera (“chamber sonata”, which was normally livelier, dance-like and lighter in mood). The Trio Sonata No. 4 in C minor can be classed as a sonata da chiesa, but Bach allows the opening movement to contain a lilting sicilianodance rhythm. However, the contour of the melody is very closely connected to the famous and moving aria Ebarme dich (“Have Mercy on me, Lord…”) from his St. Matthew Passion, the colossal sacred oratorio he wrote some four years after leaving the court at Köthen. The second movement is move lively and features Bach’s unmatched ability in contrapuntal writing. The third movement features a more poignant melody in the violin of a gently pulsating accompaniment, before the final movement bursts forth in a highly complex fugue.

Bach was also indebted to Italian composers for more than just his trio sonatas. It is highly possible that, without the work of Domenico Gabrielli, Bach may not have ever written his extraordinary cello suites.  In the later years of the Renaissance, Italy emerged as an epicentre of musical breakthroughs. While Rome championed sublime, classic counterpoint – a stabilizing influence, as the conservative Vatican saw it – Venice, a city that was experiencing its zenith of economic and military power, grew ever more audacious in its musical experiments. Musicians from all the northern Italian cities and from foreign lands aspired to appointments there, and the Doges supported their musical enterprises lavishly. These experimental tendencies spread throughout the north of Italy well into the late 17th and 18th centuries, and Gabrielli, a resident of Bologna, was no exception when it came to pioneering new styles of music.

Gabrielli arguably established the use of the cello as a solo instrument, being one of the earliest documented cello virtuosi, and his two cello sonatas are examples of his extraordinary command of the instrument. Both highly complex and utterly joyous in turn, cellist Chris Grist has chosen to perform the light-hearted first of these sonatas.

In stark contrast to the other composers featured in this concert, Jean-Phillipe Rameau’s early career is something of a mystery; very little is documented about this life until the 1720s, when he began winning fame for his Treatise on Harmony(1722), written when he was thirty-nine, and then the remarkable works for solo harpsichord he wrote in the following years. He was almost in his 50s when he began writing his operas, and it is for these that he is principally known today.

The set of five Piéces de clavecin en concerts, published in 1741, were written in the midst of this opera-writing phase, and they are considered by some scholars to be the pinnacle of French chamber music in the Baroque era. Although they hark back to the solo harpsichord works of his earlier career, it is hardly surprising that the world of the theatre is never far from them; several of the movements were later reworked for inclusion into his operas. They are filled with all the imagination, passion, and drama that enliven his stage works. All the parts are demanding, but the harpsichord writing is especially challenging! Demanding numerous arpeggio patterns, hand-crossing and fast scalic passages, it requires a tour-de-force of technical skill.

The first concert in the set of five is set in three movements, with each movement headed by a title. The first, La Coulicam, refers to Thamas Kouli Khan, a Persian king who is featured in the exotic novel, Histoire de la derrière revolution de Perse (1728, reissued 1742), written by André de Claustre. The second, La Livri, is a commemoration for the Comte de Livri, a notable patron of musicians, actors, and playwrights who died in 1741, and Rameau later re-orchestrated the movement in his 1749 opera, Zoroastre. The final movement, Le Vézinet, refers to a town with a fashionable promenading area in what was then the countryside west of Paris.

To conclude this concert, we have chosen to feature perhaps the most well-known example of the Trio Sonata form. ‘La Follia’ was a well-known 15th century melody that has proven to be extremely popular amongst classical composers from several different generations; scholars have identified over 150 composers who have used it in their works. Vivaldi’s contemporaries such as Scarlatti, J.S. Bach and Handel all turned their hands to including the theme in their works, and even the 19th century saw the theme make an appearance, most notably in the 2nd movement of Beethoven’s Symphony No. 5. The Italian term literally translates as ‘madness’.

However, Vivaldi’s Trio Sonata in D minor, based on this motif, is arguably the most famous example. What starts as a simple, gentle sarabande gradually morphs into a set of twenty highly complex and imaginative variations, with all three instrumentalists requiring extraordinary dexterity and skill. 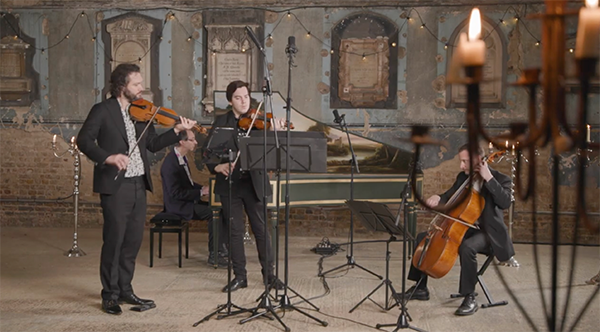 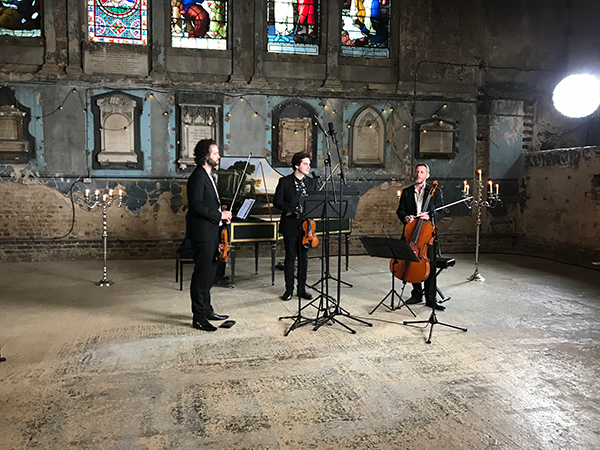 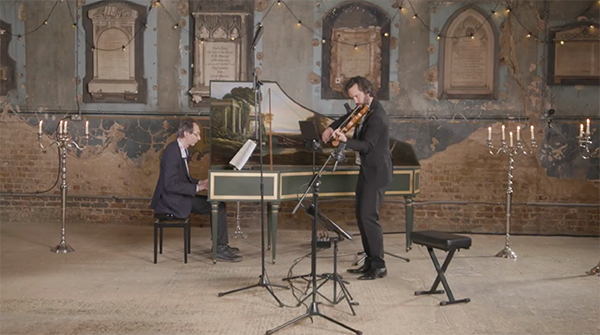 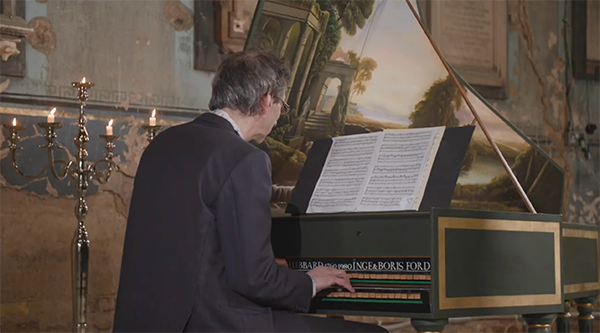 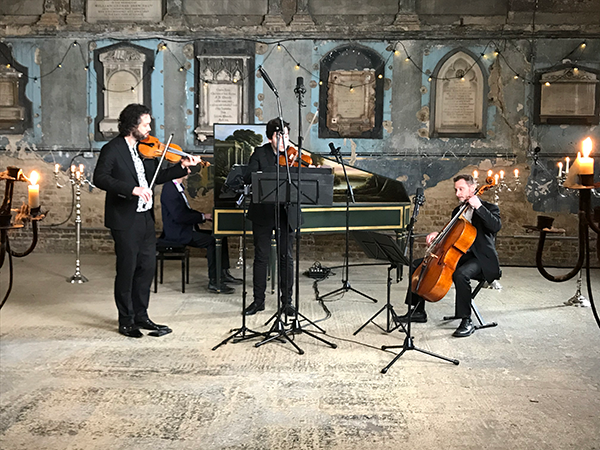 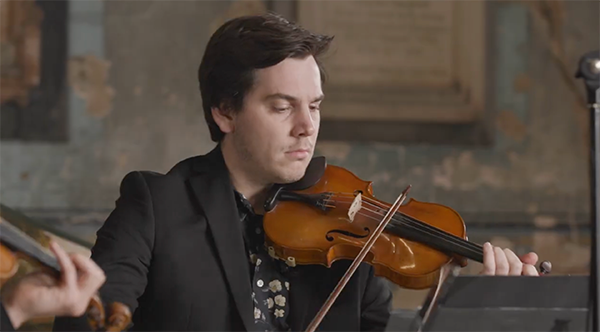 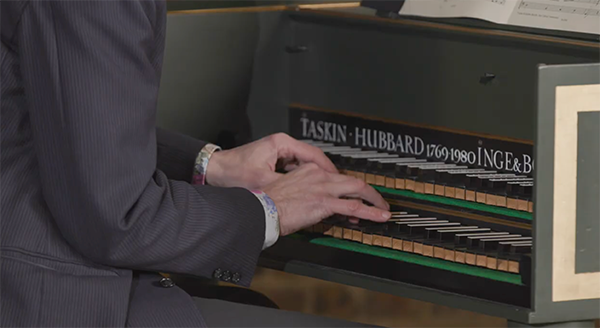